The Hidden History of White Slaves
Is It True That White Irish People Were Slaves, And Not Just Black People? 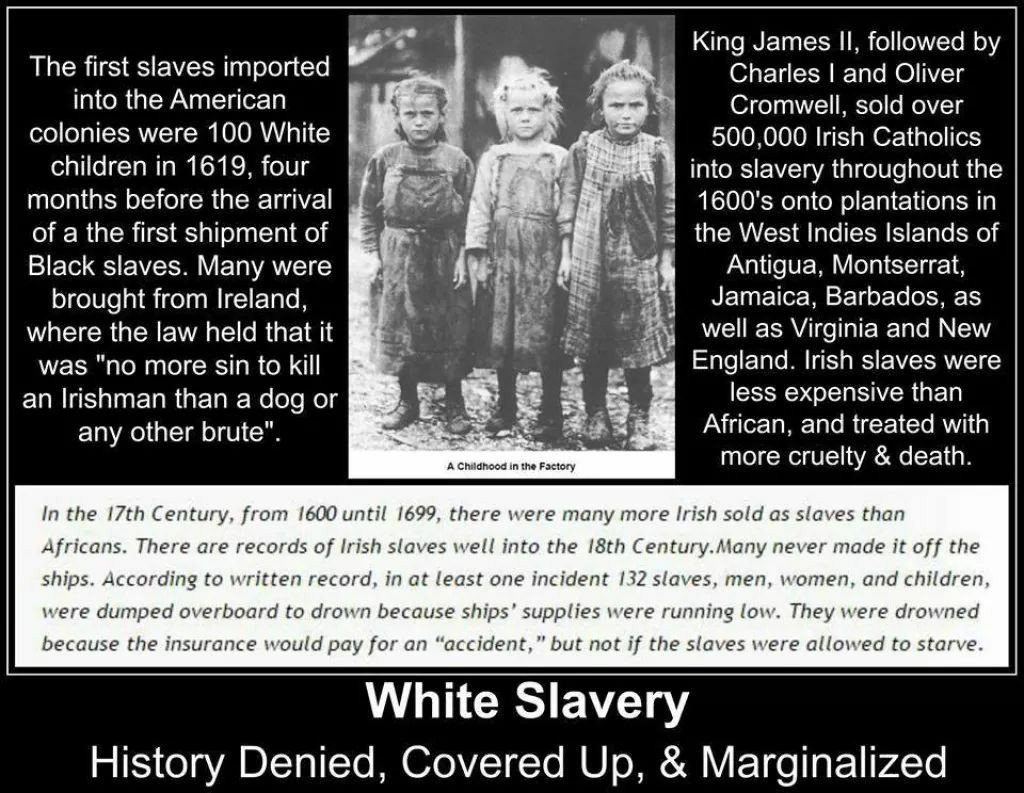 The website "Snopes" and other Democrats are claiming that the claim is false. They are saying that the white Irish people were never slaves because their situation doesn't 100% match what happened with the black African slaves that were brought to America. Yet their own sources that they use to try to refute the facts, admit that the white Irish people were sometimes treated brutally, some were underage children and that some were servants without permission of their own will. Well, if they were servants unwillingly, then that makes them slaves! Period! It doesn't matter that some of them were in a contract for 7 years of servitude. In fact, that actually helps validate that they were true slaves. Even in the bible, it talks about slaves that were to be released after 7 years. So that fact doesn't remove the other fact, that they were slaves who were held in bondage, treated harshly sometimes, and had to obey every word of their masters, and had to endure hard labor.

I first was introduced to these historical facts on Twitter. Although the democrats were trolling the messages and claiming that it was fake news, there were also people commenting on it, that were giving their own personal testimonies concerning their ancestors (grandparents, aunts, great-grandparents, etc) that were white slaves! Some of them had documented proof of their ancestors' slavery, such as wills, etc. If anyone would know the truth, the descendants of these white slaves would be the ones to know and uphold the truth! Also, the original tweet was posted by a black man. He is a black man, not a white supremacist! He is just a man who appreciates truth!

A couple of days after learning of these historical facts, I shared the information with one of my spiritual brothers. Then, he shared with me that he had just learned the same thing, (without Twitter) also in the same time frame of just the past couple of days! Yet, neither of us had communicated with each other about what we were reading and seeing and learning. Therefore, it is impossible for this to be a coincidence! This is the Almighty God in Jesus name, confirming the historical accuracy of the fact that there were white Irish slaves. In fact, the Irish were not the first white slaves, nor the last. The Israelite people were white slaves in Egypt, as well as in Assyria and Babylon. Plus, in modern times, groups like ISIS in the middle east still capture and hold white slaves. Fact!

None of this lessens the facts of the pain and suffering that the African black people also endured. Nevertheless, the historical facts of white slaves should not be denied, nor hidden. According to the Holy Bible, all races and all nations were created from one blood through Adam. (Acts 17:26) We are all related. Jews, Hebrews, Mexicans, whites, blacks, all colors and all nationalities; we are all related. I love my black and brown brothers and sisters just as much as I love my white brothers and sisters. I am not racist. I am not a white supremacist. I am not a Nazi. But I love truth and I must uphold truth and share truth. I will not allow the Fascist Democrat party to deny historical facts. The truth is that the democrat party is the most racist political group in the United States of America. They hate white people. And they brainwash their supporters to also hate white people. Their supporters/voters are so brainwashed, that I have repeatedly seen white democrats claiming that because they were born white, that beyond their control, that they have white privilege and that beyond their control, they also are racist. Even though they vote in support of black supremacy, and against white people, they still think that they are racist against blacks and have no control over this. These democrats are brainless robots! And they are demon possessed. The demon-rats support every form of wickedness on this Earth. They support the demonic forces of Islam, wicked Communism, sinful homosexuality and the murder/abortion of innocent, defenseless babies. There is no way that a democrat can enter Heaven until they repent of their wickedness & of their hatred of everything that is good and godly. They hate true Christians, who must be conservative. They hate their own race if they are white. They hate white people. They hate men. They hate boys. They hate masculinity. They hate heterosexuals. They hate Christians. They hate Republicans. They hate President Trump. They hate unborn babies. They hate life. They hate the bible. They hate God. They hate Jesus. They hate free speech. They hate facts. They hate historical proof. They hate, hate, hate! The democrats are the true fascists.
Historical facts prove that the Democrats are the ones who publicly supported Hitler and his Nazi regime. And the historical facts show that the KKK was, and still are, the Democrats! If you do not believe me, do your own research and think for yourself, instead of being a mindless robot of the Democrat, demonic party of Satan.

The Hidden History of White Slaves
Is It True That White Irish People Were Slaves, And Not Just Black People? Copyright 2018 I Saw The Light Ministries