PRAISE THE ALMIGHTY CREATOR OF HEAVEN AND EARTH!

PLEASE READ ENTIRE PAGE, IT HAS BEEN UPDATED AND PROGRESSED THRU TIME.

EARTHQUAKE 7.2 XINJIANG-XIZANG BORDER REGION TIBET/(CHINA) - Many moderate aftershocks follow. This is in the midst of the violent protest/uprising as the Summer Olympics draw near and the China government is harshly cracking down.

Earthquake info:
IS there a warning against California in the Tibet 7.2 earthquake?

China issues "21 Most Wanted" protesters as the call to boycott builds up. (21 most wanted = March 21)

March 23, 2008
BREAKING: Syria masses three army divisions on Lebanese border
March 23, 2008, 7:56 PM (GMT+02:00)
DEBKAfile’s military sources report that the Syrian deployment is backed by the concentration of pro-Syrian Palestinian factions in the Beqaa valley of Lebanon, amid rising war tensions between Hizballah and Israel.
Hassan Nasrallah declared Hizballah would wage “open war” with Israel at the end of the 40-day mourning period the group observed for Imad Mughniyeh who was killed in Damascus February 12. His deputy has maintained that Hizballah had “100 percent solid evidence" that Israel had killed Mughniyeh, which Israel has consistently denied.
Monday, March 24, Nasrallah will address a big memorial rally in South Beirut. The Israeli army is on high alert for a possible Hizballah attack from Lebanon. The Magen David Adom ambulance service is on emergency standby across the country. -
http://www.debka.com/headline.php?hid=5136

So, in conclusion, what happened? Well, during the midst of the Tibet uprising, there was the 7.2 earthquake. Can that be a coincidence? It was also the 28 Anniversary of President Carter declaring boycott against communist Olympics of Moscow. No, it's not coincidence! There are no accidents or coincidences. It is very certain to me that this was a sign. Can you see a sign when you see it? Are you watching the road? When two signs point to the same place, you know you have a confirmation. Both events occurred same location and timing. No coincidence. The earth is being shaken. It's time to wake up. Repent now, for the kingdoms of this world are about the become the Kingdom of God! Repent of your abortions, murders, hates, pagan customs and traditions. Shaking hands at church is not fellowship! The judgment starts in the church first. Please see additional warnings. Click HERE!

CONNECTIONS: On March 14, 2008 the Tornado, the first one to be recorded in downtown Atlanta and did cause death, hit including CNN Headquarters and Olympic Park, (where the bombing was in the Atlanta, GA. American Olympics of 1996). March 21 was the 28 year anniversary of the Carter declaration of the Olympic boycott against the Russians. March 21 was the 7.2 Earthquake in the Tibet/China region. China is of course set to host the Olympics this year.

UPDATE 7-28-2008:
I know I have been talking about March 21 above, but for a couple of minutes, please let me discuss something about July 21 which just passed. I did not give July 21 as a date to watch. However, there is a possibility, that is a possibility, that July 21 could be a sign! Here is why:
I am now realizing that something very important occurred on July 21, 2008.
A B-52 Bomber Stratofortress belonging to the United States Air Force (USAF) crashed with six crew members on board. The bomber crashed at 9:45 a.m. local time. The aircraft was posted to Guam's Andersen Air Force Base as part of a four-month rotation scheme and was based in Barksdale Air Force Base in Louisiana. It is believed that the bomber was scheduled to be used in a flyover of Liberation Day crowds celebrating the 1944 capture of Guam from Japan by the US, with the island remaining a US territory. However, some confusion exists over whether it was in fact another aircraft that was scheduled for the flyover. This is the second aircraft that the USAF has lost at Guam this year. On February 23, 2008, (one of the prophecy dates you were told in advance to watch), a B-2 stealth bomber crashed on takeoff at Andersen Air Force Base with the loss costing an estimated US$1.4 billion. In Feb, both pilots escaped by ejecting, and the accident was determined to have been caused by moisture on a sensor. Please scroll down below the picture for more edification. vvv 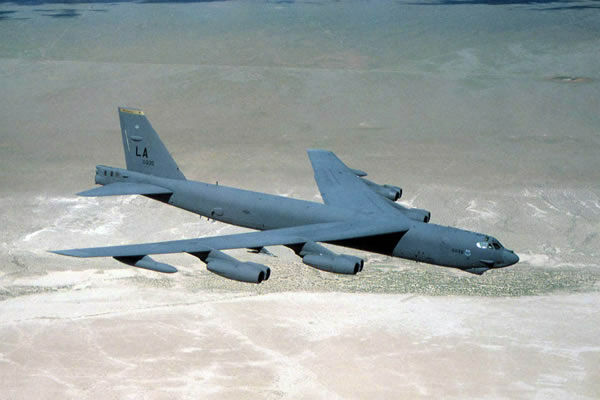