This is a very controversial subject and is very emotional for many people. Please read this entire post before jumping to conclusion of what I am saying. I was born and raised in the south in the United States. I understand that many southerns do not view the confederate flag as a sign of hate, prejudice or slavery, but rather just a part of history and a sign of protest against the policies of the northern Union during the civil war, such as high taxes and a totalitarian federal government asserting too much control over the states, problems that are again repeating history. I also understand that the demon-crats are going overboard in their political correctness and in their fight against freedom of speech. But we must be willing to listen to The Holy Spirit and what He says about this topic.

The Holy Spirit has led me to understand that there is much more than meets the eye concerning the confederate flag and what is currently happening. After the demon-crats started waging war against the confederate battle flag, many people started flying the confederate flag, putting it on their cars and trucks, front yards, Facebook walls, etc. It is seen more now since at any time since the Civil War. The war against the confederate flag has caused this flag to be seen more, not less. It is flying all over the place! This battle flag, a flag of war is being raised all over America. There is a Spirit behind this and a very important prophetic message for America. The flag represents a war against the Union of the United States. It represents a war against the president. It represents war and division. Even if not based on prejudice and hate, it's still a flag of war and division. It is the Spirit of War raging across America right now. The x symbol on the flag, a rotating cross, is very similar to the Nazi Swastika and is the same in the Spirit. Although some people who idolize this flag do not see it as hatred, many others do and it is also used by the white power Nazi groups. As much as I initially tried to give credit to those who are saying that there is nothing wrong with the flag, I cannot resist the voice of The Holy Spirit and discernment that there is absolutely something evil about the flag. It was ordained for this current war against the flag to occur so that the flag would be raised again across America as a prophetic sign of invasion, war, division, hate, chaos, etc. It is a sign/flag that the Nazi Assyrian Son of Perdition, Bashar Assad, president of Syria, will be coming to divide and invade America. The Spirit of the Gog Magog War is very much alive all across America right now in these confederate battle flags being raised more now than it has in over 100 years. It is a sign of judgment upon Obama and a sign of invasion of the American Union. Let it fly, because it is ordained to do so as a warning and prophetic sign against all of America that war, invasion and the judgment of God is upon us. If you disagree, I ask in Jesus' name for you to please at least ask The Almighty what He thinks of the flag and for Holy Spirit discernment concerning it.

Related Articles:
The Swastika, 666 & the Mark of the Beast
The Son of Perdition (Antichrist) Revealed 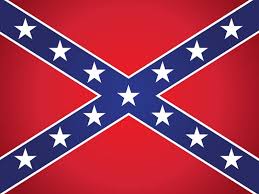 Our online newsletters are located at http://proveallthings.weebly.com (Be sure to click on both "blog" and "current breaking news".)
But when you subscribe via email, you will be notified immediately of updates/edits to the website, new articles, important breaking news as it relates to bible prophecy being fulfilled, major earthquakes and heavenly inspirations, etc. Our newsletter will keep you informed of prophetic world events as well as ministry updates.
Low message volume. Your email will not be overloaded with junk messages. You may cancel and unsubscribe at anytime.
We do not sell or share your information with anyone.
Click here to subscribe to our newsletter notifications mailing list.